For rail and history buffs young and old

The Depot Museum presents history exhibits from usually around mid-May to mid-September each year (see the calendar on this website).  The region has a rich history in Yellowstone Park travel and the rails that originally carried people there starting in the 1880s.  A variety of both regular and special exhibits are on display, including these:

In addition, the Depot Museum each year features a new exhibit of special interest.   This year we are pleased to announce: 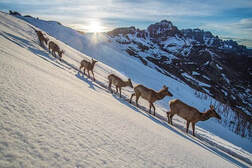 "Invisible Boundaries:
Exploring Yellowstone’s Great Animal Migrations"
In from acclaimed appearances at the Buffalo Bill Center of the West, the Yale Peabody Museum, the Jackson National Museum of Wildlife Art, and the Natural History Museum of Utah, Invisible Boundaries is an exhibition on the migrations of elk and other charismatic, wide-ranging wildlife in the Greater Yellowstone Ecosystem.  It explores the challenges these animals face as they leave Yellowstone National Park and cross into surrounding multiple-use and private lands in search of winter resources.  The exhibit features stunning photographs and video, interactive migration maps, cultural objects, and original artwork to tell the story of animal migrations and cutting-edge conservation science in one of the world's most renowned natural heritage sites.  And now it returns home for appearance once again in the Greater Yellowstone Ecosystem.  Be sure not to miss it! 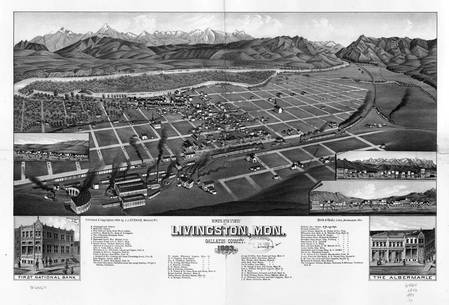 In 1883, the Northern Pacific Railroad connected its eastern and western divisions west of Livingston, forever binding Montana to the population centers in the Midwest and on the west coast.  Between 1883 and 1909, two more transcontinental rail links crossed Montana. The railroads needed to fill both their passenger and freight trains and thus came to place a high priority on convincing settlers to move west, as well as on finding and promoting tourist destinations.  Livingston was a key center for the Northern Pacific, not only because it lay midway between the NP's endpoints at Seattle and St. Paul, as well as at the beginning of the Rocky Mountain passes its workers paid so dearly to cross, but also because the NP promoted it heavily as the first railroad gateway to Yellowstone National Park.

Once the railroad entered the mountains, the problem of steep grades, tunnels, and snowbound passes replaced the relative ease of crossing the Great Plains, both in construction and in operations.  As you visit, you can begin to appreciate the extraordinary people who by skill, brawn, and often sheer will power created one of the greatest engineering feats in human history, -- the rails across the Rockies.

In addition to fascinating subdisplays ranging from regional dude ranches to railroad diningware, and even railroad magazines once read by millions, our presentations also include these:

Film in Montana
The natural beauty of Montana, and the Livingston/Park County area in particular, have made it a natural draw for filmmakers since the earliest days of even the silent movies.  From early murder mysteries set in Yellowstone to contemporary cutting-edge dramas, it has always been a "stage of dramatic proportions."  This exhibit gives visitors a basic introduction to the screen magic that has told many stories.

The Livingston Depot in History and Architecture
Besides being a lively hub of visitors passing back and forth to Yellowstone, the Depot was an unusually elaborate piece of architecture.  Learn why the NP wanted to make it a showcase station worthy of important high-end clientele, how it was constructed in a phenomenally short period of time, and how it helped shape the history of the area.

If you'd like to read about some of our past special museum exhibits too, just click here.