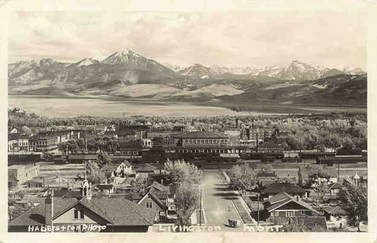 The city of Livingston as we know it today owes its existence to the Northern Pacific Railroad, which planned it out as the original gateway for travel to Yellowstone Park, for which it held a basic monopoly for about a quarter century.  It was vital as both a Park travel launch point and a key regional maintenance shops site.  The first depot was constructed in 1882 and replaced by a larger structure just 5-6 years later, but even this became inadequate for the ever-increasing numbers, and so the NP hired Reed & Stem, the original architects for New York's Grand Central Station, to design a small masterpiece worthy of the important Yellowstone visitorship.  It was rapidly completed in a remarkable half a year and built in a highly ornamented Italianate style with the two satellite buildings - the baggage building and the restaurant or "beanery" connected by a sweeping colonnade around a central courtyard adjacent to the tracks.  The main building also served as an administrative division headquarters with a network of telegraph wires busily sending out orders and communications.   Even as passenger rail began to taper off following the war years, it remained - and remains - an active hub of rail activity. 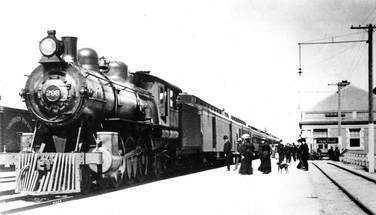 Shortly after the NP and four other lines consolidated in the 1970 merger forming the Burlington Northern, however (later the Burlington Northern Santa Fe), the Depot became an Amtrak station, until passenger service consolidated in 1979 to the old Great Northern line to the north, and the area faced significant economic challenge (if mitigated somewhat with the advent of Montana Rail Link).  Undaunted, local citizens bravely organized the Livingston Depot Foundation to restore this architectural treasure and anchor of the local historic district and bring it back again in service to all.  Since the museum's opening in 1987, the Depot Center has risen again to its former historic role of welcoming visitors to the area, this time in sharing exhibits and programs regarding the region's rich history and reminding people daily of the lively heydays of passenger rail.
Today with the help of our members, event sponsors, and friends, we are pleased to keep this community institution thriving at the heart of Livingston, Park County, and the Yellowstone region, and we hope you get a chance to visit.